If you have any other photos or manuals for the
Kikusui Electronics Corporation PLZ 70UA you can upload the files here.

The PLZ-U Series Electronic Load Unit is a compact, high-performance, multichannel electronic load unit that has three operation modes: constant current, constant resistance, and constant voltage. The PLZ-U consists of a frame and load units. Load units are inserted into the frame (control section) for operation. The PLZ-30F and PLZ-50F Frames can accommodate up to 3 channels and 5 channels of load units, respectively. The current capacity or power capacity can be increased through a parallel operation of load units. The load units can be combined to produce a power capacity from 75 W to 750 W (when five PLZ150Us are installed into the PLZ-50F). in addition to high-speed response and highly precise preset resolution, various functions are provided including the soft start function, variable slew rates, switching function, ABC preset memories, four setup memories, and sequence function. Because the PLZ-U comes standard with GPIB and RS-232C communication functions, it can easily be incorporated into various test and inspection systems. The communication functions are useful for testing batteries, DC/DC converters, switching power supplies, and multi-output power supplies. In addition to the advanced constant current, constant resistance, and constant voltage functions, the PLZ-U Series Electronic Load Unit offers wide variety of other features. ■ Compact and light Compact and light weighing only approximately 11 kg and 17 kg for 3 channels and 5 channels, respectively. ■ High-speed response In constant current mode, a current rise and fall slew rate of 2.4 Α/μ8 (PLZ150U) is possible (converts to a rise and fall time of 10 μβ). Simulations that closely resemble a real load are possible by using the PLZ-U as a load for DC power transient response tests and as a dummy load M High precision and high resolution Three ranges are built into the PLZ-U achieving both wide dynamic range and high resolution. The PLZ-U provides displays with up to 5 digits for voltage, current, and power measurement functions as well as minimum preset resolutions of 10 μΑ (PLZ70UA) and 20 μΑ (PLZ150U). ■ Variable slew rate The current slew rate can be varied continuously in constant current mode and constant resistance mode. This feature allows the suppression of transient voltage drops due to the wiring inductance that occurs when a load is switched and transient voltages of constant voltage power supplies, etc. ■ Multi channels Up to five and three channels can be installed into the PLZ-50F and PLZ-30F, respectively. Each channel is isolated and can be used independently or linked with each other. Different units (PLZ150Us and PLZ70UAs) can be installed in the frame. ■ Low noise High reliability and low noise have been achieved by the adoption of a heat sensing variable speed fan and the enhanced cooling structure. ■ Large capacity Parallel operation is possible on up to five adjacent load units of the same type. Five PLZ70UAs installed in PLZ-50F operating in parallel produce 375 W. Five PLZ150Us installed in PLZ-50F operating in parallel produce 750 W. ■ 0 V type The PLZ70UA is a 0 V input operating voltage unit. This feature is a must for single cell tests of fuel cells. Moreover, the operating voltage of semiconductor devices is decreasing more and more due to the reduction of the power consumption and miniaturization of the semiconductor process. The PLZ70UA can be used to evaluate the power supplies for these types of applications. 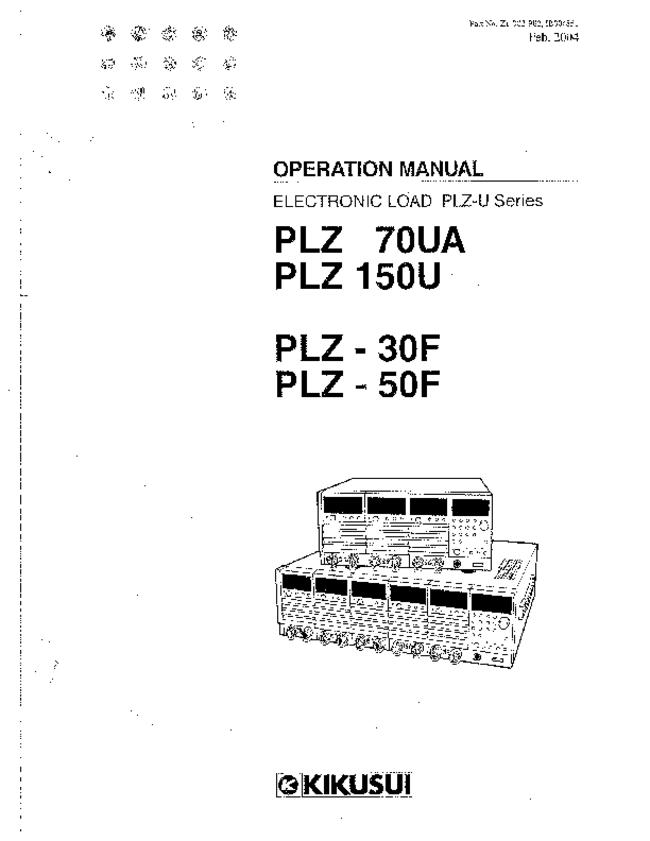